Ice Ghosts: The Epic Hunt for the Lost Franklin Expedition 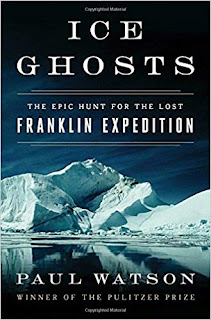 Ice Ghosts: The Epic Hunt for the Lost Franklin Expedition
by: Paul Watson

In 1845, 129 brave crewmen set out to find the elusive Northwest Passage.  These men were the most prepared, technologically advanced expedition of their time, confident that if the Northwest Passage existed, they were the ones who would find it.  Unfortunately, the Franklin’s Expedition’s legacy was one of the longest searches for missing naval ships. Terror and Erebus proved elusive for over 170 years.

Watson tells this amazing story of the hunt for Terror and Erebus from the inception of Franklin’s expedition, to the amazing persistence of Franklin’s wife in order to recover his body, to the modern expeditions in the 1960s and beyond in search of the lost ships. Learning of the thought and science that went into creating this expedition was absolutely fascinating. Fresh ideas such as inflatable boats, canning, and the need for entertainment during long periods of extreme suffering were all implemented on this journey making it a cutting edge expedition. When it became clear that something had gone terribly wrong, mission after mission sought to find the ships for decades, making it one of the greatest navel searches in history.

Decades later, people were still trying to find out what had become of the Franklin Expedition.  One such person, an Inuit historian, Louie Kamookak, made amazing strides in plotting the location of the Terror and Erebus wrecks by listening to Inuit oral history and cross examining it against the intended route. With the help of Inuit oral history, modern technology, the invention of scuba, and so much more, great discoveries were made over 170 years after that fateful voyage set sail.

This story lends itself to paper quite well, and Watson does a great job melding the old stories with modern day discoveries. I particularly enjoyed the Inuit perspective considering the land Franklin was exploring has always been theirs. Who better to know what happened than the people who know the land best?

If you are interested in Franklin’s expedition, Michael Palin from Monte Python has written a book called Erebus, and Amazon Prime just came out with a star-studded miniseries called Terror.
Posted by ChelseaI at 14:31 1 comment:

Choosing a favourite between Neil Gaiman’s books is akin to choosing a favourite snowflake. They are all different, and equally beautiful. Each book has its own distinctive voice, and each has something to say about the reality we live in and what it means to be human. But one of Gaiman’s stories that is very dear to me is Neverwhere. It exists in many formats: a television series; a novel; a comic book; a stage play; an all-star radio adaptation; an Author’s Preferred Text edition; and an audiobook. Every version is brilliant, but my favourite is the audiobook of the Author’s Preferred Text edition—the equivalent of the director’s cut in the literary world—read by the author.

In Neverwhere, Richard Mayhew is with his fiancée, Jessica, on their way to have dinner with her boss when a door opens and a girl in bulky clothes stumbles into the street and collapses. While Jessica simply walks over the girl as if she were invisible, Richard stops to help her. This act of kindness changes his life forever. The girl’s name is Door and she comes from a London that exists below the one Richard knows. It is a London where magic and darkness are very real and so are angels and monsters. The inhabitants of London Below are those that have fallen through the cracks in society, and are thus invisible to the people of London Above. When Richard helps Door return safely to London Below, he inadvertently becomes part of London Below and invisible to the people around him. Taxis won’t stop to pick him up, people that have known him for years act like he doesn’t exist anymore, and the only people that see him are those the rest of society also seems to not see, those without a home.  Richard then begins a dangerous journey into London Below to find his way back to his life in London Above.

Neverwhere is an excellent example of how fantasy can sometimes expose reality more deeply than other genres. Neverwhere explores the theme of homelessness and how people can fall through the cracks and become invisible simply by being different. It invites us to look at our world with critical lenses, and makes it impossible to walk by human suffering without acknowledging it. No person should be invisible.

The dictionary definition of Hysteria -- exaggerated or uncontrollable emotion or excitement, describes well the experiences of Heike Lerner, the main character in Elisabeth de Mariaffi’s novel with this title.

The story begins with Heike and her younger sister escaping from Nazi Germany. It is a brutal trek for the two young girls through the European woods, during which time Heike’s sister disappears. Requiring convalescent care after this escape, Heike was taken into a convent to recuperate under the psychiatric care of Dr. Eric Lerner.

Fast forward to the 1950’s and Heike is now married to Eric and living in America. She has a seemingly perfect life, complete with her successful husband; Daniel, her son whom she adores; and a summer house by the lake where she spends the days exploring the woods, swimming and canoeing.  However, Heike begins to notice some odd things. In the woods is a cabin that appears to be abandoned, there’s a strange girl who appears at the lake, but then seemingly disappears underwater, and Eric is confusing her with a recollection of events that differs from hers.

Heike begins to confide her confusion to Leo Dolan, an American screenwriter and host of one of the many soirees Eric and Heike attend, and to Arden, Eric’s sister. Through these relationships Heike’s situation becomes clearer, and we realize that Heike suspects Eric’s control is more to do with experimental drugs than simply mind games.

Things begin to spiral further out of control when Leo brings Heike home one night and she finds that Daniel has gone missing. Eric seems unconcerned about his disappearance, remaining calm and unworried, serving only to cement Heike’s feelings of unease. Is Eric responsible for Daniel’s disappearance?

Heike’s search for Daniel further blurs the lines between perception and reality until the twisted ending when all is revealed.

A must read for those who enjoy an eerie tale that begins with a girl lost in the woods.

Helen Varga is a library technician at the Steveston Branch of the Richmond Public Library.
Posted by Helen V at 15:46 No comments: