July is a slave in Jamaica in the 1800s.  Life is understandably harsh, but July’s mistress, Caroline, takes a liking to her and provides her with the life of a lady’s maid which is much more genteel than the hard, forced labor of the people in the fields.  Life changes for July when Caroline hires a new overseer with forward-thinking ideas.  Robert’s religious upbringing has the effect that he treats the slaves with what he believes is respect – as long as they don’t overstep their bounds.

His attraction to July comes as a shock to him, but he knows a white man cannot love a black slave.  Instead, he marries Caroline – an act he believes justifies his pursuit of a relationship with July.  In Robert’s worldview, having both a wife and a black mistress makes him an upstanding man.  For her part, July loves Robert and feels that she has been lifted above her station.

When the abolition of slavery arrives in Jamaica, chaos reigns.  The once-upon-a-time slaves who still work for Robert refuse to put in the long hours he requires and the situation explodes.  Robert and Caroline eventually return to England, with tragic consequences for July.

This is a very heavy read with good reason.  But make no mistake – Levy’s exploration of one slave’s life during a time of terrible hardship is absolutely worth reading
Posted by Christine at 17:41 9 comments:


Marina Singh is accustomed to her quiet existence working in a pharmaceutical lab, but when her lab partner, Anders, disappears on a mission to the Amazon, Marina leaves her comfort zone to go and retrieve him.

In the jungle Marina tracks down her former mentor, Dr. Annick Swenson, and her team of scientists.  She discovers that their research goes far beyond the malaria cure that their funding prescribes.  When she discovers that the team is on the verge of a breakthrough in reproductive technology, she is swept up in the excitement.  At times Marina seems almost subsumed by the magic and mystery of the Amazon.

As the plot unfolds it becomes clear that the research taking place is crossing clear ethical boundaries.  The novel questions whether scientific research should be undertaken for its own sake.  Is it enough to expand our scientific horizons?  Or are there lines that should simply not be crossed?

Fast-paced and full of suspense, this book is a fantastic read.  I couldn't put it down!
Posted by Christine at 16:54 17 comments:

The Back of the Turtle

The Back of the Turtle, a Governor General's award-winner,  is a little bit Tom Robbins-esque with a quirky cast of characters from various backgrounds who are linked via an environmental tragedy.  When a northern B.C. tailings pond fails, it fills a river system with toxins, killing everything in its path.  Dorian Asher, the CEO of the company responsible, is more concerned about his new Rolex than his company's mistake.  He's prepared to handle the media onslaught, but the disappearance of Gabriel Quinn, his top scientist, is making things more complicated.

Meanwhile, Quinn has turned up at the virtual ghost town of Samaritan Bay where a previous environmental disaster decimated both the town and the adjacent Native reserve.  As the scientist responsible for the poisoning of Samaritan Bay and its environs, he ostensibly goes to the site to commit suicide.  Instead he meets townsfolk who are hoping for the return of the people, their town, and their beloved turtles, who used to lay eggs on the beach.  Samaritan Bay could in fact be the place Quinn finds his redemption.

This novel is rather timely considering that a very similar tailings pond disaster did occur in northern B.C. last summer.  As in real life, the media’s handling of the situation in the novel is at first intense, but the disaster is quickly forgotten when a fresh tragedy occurs.

Despite the heavy subject matter, King takes a comic approach.  Rebirth and renewal are major themes.  Although the book is over 500 pages long, it’s a light, enjoyable read. 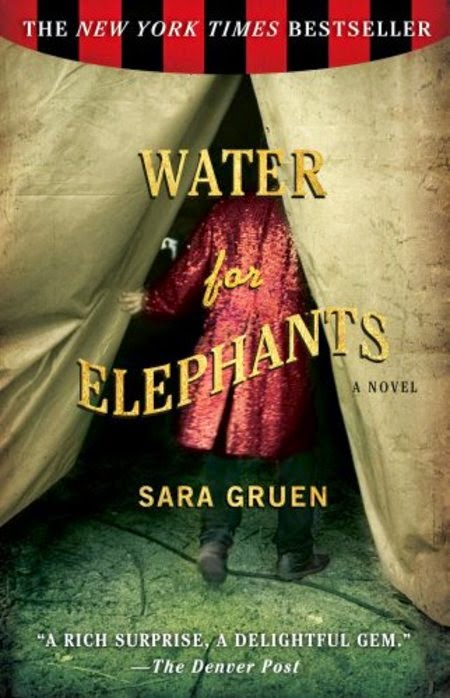 This is one that outdid the movie. I loved this book. I found that the author really did her homework in researching the life of a circus employee. The circus is a tough life. Living on the road always on the go; traveling from town to town. This book describes what it was like for people of the circus. What might look like a glittery and glossy life of entertainment and excitement is actually filled with blood, sweet and tears. But through it all our main character prevails and even finds love on the road. I especially liked the ending, without spoiling anything our hero follows his heart. I found that the moral of Water for Elephants was dream, follow your heart and be strong. I felt empowered after reading this. There are wonderful images throughout that help with the story. I liked that the story felt as if it was a non-fiction piece.
Posted by Unknown at 17:34 3 comments: 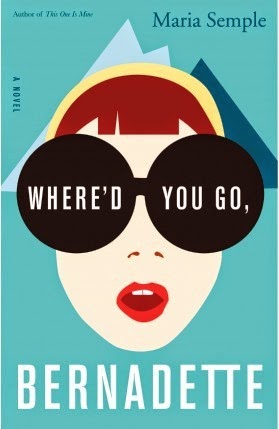 This bestselling novel is a great pick if you are looking for a quick read. I thoroughly enjoyed this book and became quite attached to the characters. It's funny, quirky, and there's a bit of a mystery. Where'd You Go, Bernadette is set in Seattle so reflections on the weather and West Coast culture may seem familiar. The format put me off at first – it’s mostly in the form of different correspondences from what seem like unrelated people but I soon got used to it and found the book to be quite clever.