A God in Ruins

I have loved every book that I have read by Kate Atkinson and A God in Ruins is no exception. Her latest work is the companion novel to Life After Life - which features Ursula Todd as she lives her life over and over again, trying to get things right.

A God in Ruins turns its attention to the much-loved Teddy, Ursula's younger brother. Teddy is recruited as an RAF bomber pilot in the second world war and as such has accepted he will die during the war. However, when the war is over, and Teddy is still alive, he must adjust to a life he never thought he would live.

And Then There Were None 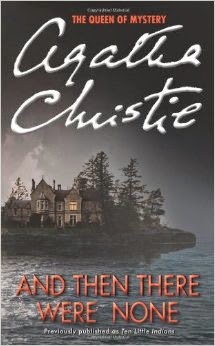 And Then There Were None is one of our Book Club Favourites. As some of you already know I am a fan of a good mystery and this is a classic. I remember watching the movie when I was little and listening to the BBC radio version as a teen; so now I have decided to re-read this time-honoured classic and share my thoughts with you. I enjoyed stepping back in time to a place where there are no cell phones. Agatha Christie's award winning mysteries are time honoured for a reason. This tale is filled with twists and turns and is sure to keep you interested until the end.
Ten strangers have been invited, for the weekend, to be guests at a private estate on a private island by a mysterious host. This sounds like a lovely and exciting getaway but these ten strangers are in for a terrible surprise. As the guests arrive they are led to their rooms but the host is nowhere to be found. On the wall of each room is a nursery rhyme, "Ten Little Soldier Boys." On the dinning table are ten strange figurines of soldiers. The guests settle in for the first evening when a voice, seemingly coming from nowhere, begins to tell of the secret pasts of the guests. It turns out that these guests all have a terrible, murderous secret in their pasts. As the story unfolds our guests begin to die, the soldier figures begin to disappear and our murderer remains a mystery. Is there anyone else on the island? Does the nursery rhyme hold a clue? Who is the host of this morbid party, U.N. Owen?
"Ten little soldier boys went out to dine, one went and choked himself and then there were nine ..." 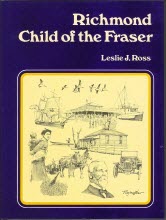 I enjoy looking into the past, reading about times gone by, looking at pictures of historical events, I have spent time volunteering at both the City of Vancouver and the City of Richmond Archives, flipping through historical documents and scanning images. I especially love learning about places that I have lived. I have lived in Richmond for most of my life and Child of the Fraser is a treasure that all Richmond-ites should check out.
First published to mark Richmond's Centennial, it is filled with a collection of photographs, letters, and primary documents. For those who have ever done or ever need to do a project about Richmond or want to research Richmond, this is a wonderful resource. This book is a fun blast from the past and lets readers see how much Richmond has changed in such a short time. My favourite image is on page 12; an aerial of Steveston Harbour, my my my how things have changed. After you take the time you enjoy this short read you may also want to venture over to the City of Richmond Archives, make an appointment today!
Posted by Unknown at 17:00 No comments: