Everything I Never Told You


Lydia Lee, favoured daughter of James and Marilyn Lee, sister to Hannah and Nathan, intelligent, beautiful and perfect in her parents’ eyes, is dead.  A non-swimmer, Lydia is found floating in the lake.  Her parents immediately blame an outsider.  But Lydia, it turns out, is not what she seemed.

In small town Ohio in the 1970s, the Lees are an anomaly.  James is Chinese – Marilyn is white.  Growing up, James was often the object of ridicule, and as an adult he still acutely feels the pain of being ostracized.  James put all his efforts into his education, and he excelled.  But what James wants now for his daughter is popularity and conformity – he wants her to fit in.

Like James, Marilyn excelled in school.  In university, she was often the only woman in her science classes.  Men never took her seriously, but Marilyn persisted.  But pregnancy changed all that.  Now a mother of three, Marilyn desperately wants Lydia to succeed where she failed.

Both parents badger Lydia constantly about school and friendships.  She is signed up for accelerated science classes, given pretty dresses and told to go to the dance.  As the pressure mounts, Lydia becomes more and more dishonest about who she really is.  She just can’t maintain the perfection that her parents expect.

Each family member’s story is slowly revealed as the novel goes on.  Nathan is a lover of astronomy and an excellent student.  When he is accepted to Harvard, his parents barely notice.  Nathan is also a very perceptive brother.  He sees the pressure that Lydia is under and offers his comfort and sympathy.

Hannah is younger and creeps about like a cat.  She has grown up being ignored.  She has become silent and watchful, with an uncanny understanding of her elders.

In Lydia’s case, her unhappiness ultimately leads to her death. But was it suicide?  Was she lured to the lake by the undesirable boy she’s been hanging out with?  Each family member pursues their own leads.  In the end, despite their dysfunctionality, Ng offers hope that this family can, somehow, make amends.

Posted by Christine at 14:29 No comments: 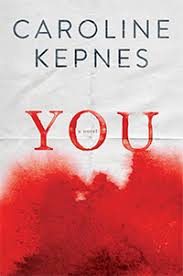 Joe Goldberg meets Guinevere Beck in a cozy bookstore in the East Village and it is love at first sight. For Joe.  Sadly, he forgets to ask for her number! Like any love sick person would do, he tracks her down using her credit card information, and finds the perfect opportunity on her Twitter feed to have a second ‘chance’ meeting to ask her out properly.  While a bit of an extreme reaction to most, this is a perfectly reasonable solution to Joe, a serial stalker.

Joe will stop at nothing to insert himself into Beck’s life, even if it means removing the people in her life who don’t spark joy. By adjusting Beck’s social circle and watching her communication through her stolen phone, Joe worms his way into her life without her realizing the true extent of his devotion.  Joe is not the staid, upstanding (if a bit boring), boyfriend she thinks him to be, but a deeply disturbed stalker, obsessed with every aspect of Beck.

Told from Joe’s perspective, this novel is somewhat unsettling.  All his twisted rationale makes perfect sense when read from his viewpoint. While you know as the reader that everything he is thinking and doing are both criminal and deeply wrong, you can’t help but get swept up in the narrative he is creating for himself. Joe happens to be a weirdly likeable guy despite being a stalker and murderer with no conscience.

Kepnes does an amazing job confusing who you are rooting for by letting you get to know Joe as the hero he thinks he is, despite showing you every horrible thing he is thinking. Joe’s narrative also has you truly hating those he sees as harmful to Beck.  You find yourself cheering him on as he brings them to their end even as you know what he is doing is wrong.

As the bodies start piling up, and Joe becomes more and more single-minded in his obsession, will he escape detection? Will Beck escape his love unscathed? And what outcome are you rooting for?!  Well written, intense, and decidedly disturbing, this thriller is well worth a read!

Posted by ChelseaI at 12:35 No comments: